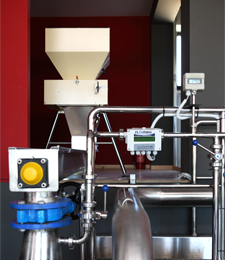 Barley malt is the basic raw material needed for the production of beer, whilst other cereal grains such as wheat, maize and rice are widely used in the brewing process. Malting of the barley is a procedure that can be briefly described as a process aimed to activate the enzymes responsible for the degradation of starch to simpler fermentable  sugars which could be assimilated by the yeast during the  fermentation of the beer  and produce alcohol.

Initially, the malt must be milled and coarse -grained in order to become the starchy endosperm better accessible for the malt  enzymes and improve the extraction process. The milling procedure is very important as on the one hand  directly affects the extraction of the sugars and proteins and on the other, the separation of  the husks from the endosperm of the grain is essential for the subsequent wort filtration.

Mashing starts with mixing the grist (grained malt) and hot brewing water in the Premasher just before entering in the “mash tun”. The  hydration enables the malt enzymes to become active.

Depending on the degree of malt modification and the type of beer that we are producing, the  mashing temperature increases gradually in order to activate specific enzymes responsible for the degradation of carbohydrates and peptides in simpler forms of  sugars and proteins  that can be metabolized by the yeast during the alcoholic fermentation.

The temperature must increase uniformly in the whole mash as the optimal activity of the specific enzymes depends directly on the temperature. That’s why the Mash-Tun is equipped with a powerful mixer and insulation in order to achieve a homogeneous mash and avoid any heat loss to the environment.